View the information in English

Why do they test drugs in the Netherlands and how does it work?

If you buy drugs in the Netherlands, be aware that the potency and purity of the drugs you buy here can be very different from the drugs you buy in your own country. In other words; you never know how strong your drugs will be. If you are trying drugs for the first time or don’t have much experience, be extra careful. We advise you to take a lower dose than you would take in your home country.

If you are staying in Amsterdam for more than a week, you can get your drugs tested anonymously at the Jellinek or GGD Amsterdam drug testing service. Drugs that you submit are analysed in a laboratory. Pills can be compared to the pills in our database. About 50% of the pills can be recognised that way. This means you’ll get the result immediately.

At the end of the 80’s Stichting Adviesbureau Drugs (SAD) and Jellinek stepped forward as the pioneering organizations of drug checking. They were illegally testing drug samples of consumers. In that time (1987) SAD also started doing reagent testing (also see ‘how does testing work’) combined with health promotion and drug education at parties/events. They did this under the ‘Safe House Campaign’ banner. Reagent testing gave limited information about the drugs content. But it was better than no information at all. Back then, the drug market was not as complicated and diverse compared to now. So given information was generally very useful for the consumer.

The Drug Information Monitoring System (DIMS) was founded in 1992. In February 1999 the minister of health, Els Borst (ministry of public health, welfare and sport) decided to centralize the drug checking and put the coordination of the DIMS program under the Trimbos Institute’s responsibility (Netherlands Institute of mental health and addiction).

The DIMS program further professionalized the drug-checking service in cooperation with another few alcohol and other drugs services (AoD services). Dancefloor testing moved to test locations in offices.

Since 1999, the primary goal of DIMS is not to offer a service to the consumer, but to monitor the Dutch illegal drug market. Based on its observations, action can be taken when an acute public health risk occurs. The possibility for the consumer to know what is in their drug is obviously a useful outcome as well.

Over the years the test service of DIMS has become better known by the general population. An increasing number of people that use drugs access the service. Especially around the public holidays and the festival season. The last couple of years it happened frequently that more drug samples were collected than the laboratory was able to analyze. There is simply not enough funds to send every collected drug sample to the lab. The DIMS program has started researching other methods to analyse drugs since 2016 to accommodate these increased needs (see FTIR section).

How does testing work?

There are currently 33 drug checking service locations in the Netherlands (run by addiction care facilities and a public health service [GGD]) where you can anonymously hand in your drug sample. There are testing services and collection points. Collection points only collect drug samples that will be sent directly to the head office. At the testing service, consumers are seen by prevention workers. Consumers get additional information about the testing service and the content of their drugs. This also creates the opportunity to answer any of the consumers questions and to educate them. Experience has shown that visitors of the drug checking service share the gain knowledge with their friend, which dramatically increases the reach of the service. In order to test your drug, you need to bring at least one whole pill (logo clearly visible), 100 mg of powder, 1 blotter or 2 millilitre of fluids.

With all drugs a reagent (Marquis) is used. The reaction of a drug with this reagent provides an indication of what drug the sample could contain. Only an indication, as many drugs will give the same or a similar reaction. It also does not indicate how strong the drug is and if there are any other active substances present. Powders and fluids are always sent to the laboratory because of this reason. It is impossible to identify the drugs exact content by just looking at the shape, colour or structure of the sample.

Pills, however, can sometimes be identified by their characteristics. Various characteristics are studied: logo, shape, type of breakline, diameter, thickness, profile (flat or bold), and colour. Also the outcome of the reagent test is one of the studied characteristics for recognition. By combining all these specific aspects, the pill can be recognized through the so called ‘weekly list’. The headquarter of the DIMS only puts pills of which they are certain of the content on this list. The list is updated every week. If there is any doubt about the content, the pill is not put on the list.

When a pill is identified through the weekly list, the consumer is informed about the average dose and the spread. Pills containing an illegal substance such as MDMA are never produced with the same quality as medication, which only may have a tiny maximum spread of the active substance. The spread of illegal drugs can be very big. This can make it difficult for the consumer to determine their dose. The spread is determined by the lowest- and highest measured amount of milligrams in the collected drug-samples. The true spread of that pill’s batch will always be bigger than the spread measured in the laboratory.

If a pill is not recognized the visitor can ask to have the sample sent to the DIMS-bureau. All drug-samples are given a unique code which is also given to the visitor. The DIMS-bureau evaluates all collected samples of that week and determines, in combination with the information they were given by the testing service, which samples will be sent to the lab for further analysis. The laboratory measures the samples with GC-MS and LC-DAD. Through the DIMS-bureau the test results are then communicated back to the drug checking service who collected the samples. The visitor can then call to the drug checking service a week after supplying the sample for their test result. The visitor is informed about the exact amount of the active compound when it is a commonly found drug (this is called quantification). Less common substances are often identified (this is called qualification) but not quantified because of the high cost involved. e.g. A sample can contain 50% cocaine, 8% levamisole and lidocaine (not quantified). At this point the following drugs are quantified: MDMA, amphetamine, methamphetamine, cocaine, levamisole, caffeine, 4-fluoramphetamine, 2C-B, fenacetine and ketamine. GHB can be (semi-)quantified through FTIR (see FTIR section).

Since 2016 the DIMS program uses an extra analysis technique. To be able to test the large amount of collected samples, the DIMS program has invested in a Fourier Transform InfraRed spectrometer. This allows drug-samples to be analyzed faster and more cost efficiently. Analysis with a FTIR-spectrometer does have a couple of disadvantages.

First, the FTIR spectrometer can only identify substances that make up at least 10% of the drug-sample. e.g. If an amphetamine sample contains 7% caffeine, it won’t show up in the analysis. This, of course, can be risky. A sample containing a low percentage of a high-risk substance, without getting picked up by the analysis, may cause dangerous situations. In reality this hardly ever occurs. When there are indications of amphetamine samples containing a possible more dangerous substance in low concentrations, the DIMS program will send all amphetamine samples to the lab for a long period of time for further control. So in practice, these risks are low.

The FTIR spectrometer provides less information than a laboratory analysis, but is still more informative then when the drug sample would not have been tested because of the limited budget. If the DIMS program has any doubt about the content of a drug sample after FTIR spectrometer analysis, they can always send the sample to the lab for a further (more accurate) analysis.

What drugs can be tested?

Almost all illegal substances can be tested, including new psychoactive substances (NPS) like 4-fluoroamphetamine (4-FA). It may occur that a substance is not yet in the laboratory’s database because of its novelty, but this does not happen often. Magic mushrooms, medicine, cannabis, tobacco, steroids, alcohol, smart-products and raw material (precursors) can not be tested.

Why does the government allow drug checking?

In the interest of public health, the government allows drug checking. The DIMS program has the task to monitor the illegal drug market and to inform consumers when potential dangerous situations occur. Warning the public has happened several times in the past. Chances are big that this has saved lives, but this is, of course, difficult to prove. For example: At the end of 2014 a pink superman pill (colour of pil + logo/shape) was found that contained a very high dose of PMMA. After putting out a warning the drug has not been seen at the drug checking services anymore and has not caused any incidents in the Netherlands, as far as we know. It has however caused several deaths in other European countries.

Since 2015 the DIMS program publishes a list of extra risky pills on drugs-test.nl. This does not mean that other pills don’t have risks, but these are pills you definitely don’t want to take. Because the DIMS program does not test all drugs that circulate on the market, this list is not complete. So it is important to be aware that other pills that are not on this list may still contain dangerous substances. You can find the list here or can find it on the Red Alert App.

The collected drug-samples provide a representation of the types of drugs that are used in the Netherlands and useful information about trends and other developments of the illegal drug market. A clear example of this is the vast increase of the average amount of MDMA in ecstasy tablets in the last few years. Because of this it was clear that more education and attention was needed for ecstasy. Especially the risks linked to the use of high doses of MDMA.

One of the conditions of the DIMS program is that illegal activities, such as the selling and production of illegal drugs, is not stimulated. That is why only consumers are allowed to test their drugs and materials for producing drugs (precursors) are not tested. Because the DIMS program only monitors the Dutch drug market, only samples that are bought in the Netherlands are tested. You can’t bring too many drugs. A maximum of 3 pills, 1 gram of powder, 3 blotters or 10ml of liquid is tolerated.

Drug checking in other countries

The DIMS program drug checking service is a unique service. There are some other countries that have similar services (for example England, Austria, Spain and Switzerland), but there are no services that operates to such extent and for such a long period time. So please use this service and test your drugs before you take anything! 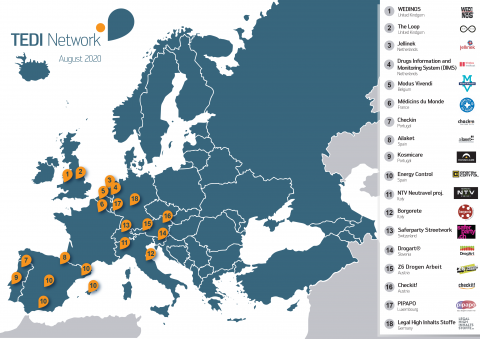